Can you improve your results and your self-image simply by deciding to take a positive outlook on life?

W. Clement Stone was born in Chicago in 1902. His father died when he was young and he was forced to work to help pay off the family’s debts. When he was under ten years old he began selling newspapers, and very soon he owned a newsstand.

Later he moved on to selling insurance, and he dropped out of high school to do this full time. He went on to create the Combined Insurance Company of America. When he was in his seventies he was said to have the energy of a 30-year-old, and at the time of his death he was a billionaire.

Much of his success has been attributed to his completely unshakeable positive outlook on life. His autobiography was called The Success System That Never Fails, and he was well-known for emphasising – in all circumstances – a “positive mental attitude”. 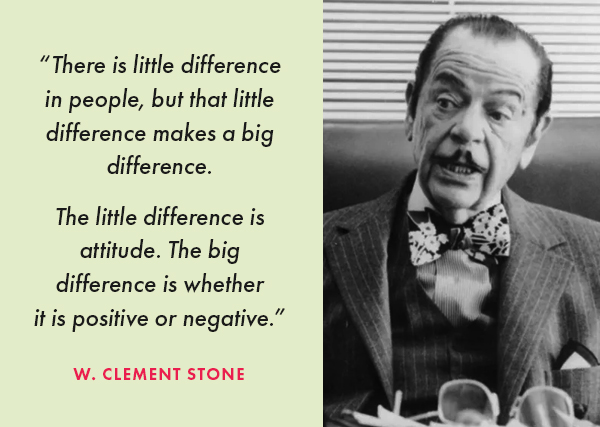 This means that, no matter what happened, he would find the positive and then move forward.

Can you apply this approach to your life and your business? How would that look?

When self-image is built in the positive this will lead to extraordinary results.

Mental rehearsal is another common strategy for improving performance in different aspects of life, including business and sport. It’s about rehearsing winning and positive momentum. It’s the emotional driver that says you’re going through a bit of a dip here but you know how you’re going to get through, because you’ve played it out in your mind.

There have been numerous studies conducted on the effectiveness of mental rehearsal. One such study was conducted by Dr Blaslotto at the University of Chicago, using a basketball team.

He split the team into three groups and tested each group on how many free throws they could make.

How To Apply This To Your Business

If you have a clear plan and purpose, you know what you are doing every day, and you have put great thought into how you are going to do it, then chances are you will succeed.

Remember, well thought out means well executed. You will push through. You will create value.

Keep on building a strong self-image. Remember, to improve your productivity it’s not only the physical that matters, it’s also mental and emotional, and it’s about alignment with the mental, physical and emotional.

Building a strong self-image is critical. It’s not about arrogance or being overconfident. It’s about keeping your feet on the ground, doing what’s tried and tested, and pushing through with confidence and clarity and – most importantly – consistency. It’s about the long game.

It’s no good getting an energy boost for three minutes and then dying. That’s not the road to productivity.